Al Riwaq Art Space was the first non-profit contemporary art space in Bahrain. It opened in the neighborhood of Adliya in 1998 and closed its doors almost two decades later in 2018. As curator and manager of Al Riwaq Art Space during its 2013/2014 season, I curated the following five exhibitions (and the Alwan338//Foundations arts festival):

Behind the Door*
Wasan Madan, with graffiti by Edd Ibrak
November 28–December 28, 2013

*These projects were made possible with the generous support of the Embassy of the United States of America in Bahrain. 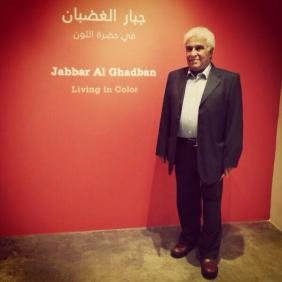 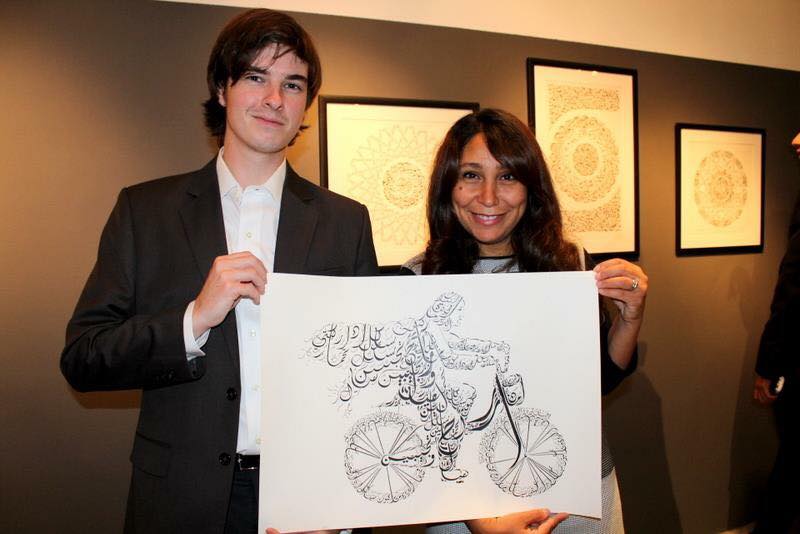 Following his most recent solo exhibition at Al Riwaq Art Space called The Studio (2011), Living in Color presents a continuation of Bahraini artist and graphic designer Jabbar Al Jabbar’s artistic trajectory that pairs a signature visual language with both a firm embrace and unique approach to mixed media.

With this new series, Jabbar intensifies and further refines his appreciation for the visual study of the human body, while finding ever-new approaches to this inexhaustible subject matter. In Living in Color, the artist’s paintings of varying formats layer both the manual and the digital, man and technology, and culminate in a celebratory exploration of life-affirming color.

Jabbar’s paintings exhibited in Living in Color can be read in the context of an enduring and steady career in the arts that is firmly grounded in a masterful grasp of both graphic design and etching. Of additional importance hereby is how Jabbar has allowed his work to evolve over time, through embracing an experimental approach to both his chosen themes and techniques. This coupling of a firm technical foundation with a drive for innovation has ensured that his artistic production has spanned decades.

Part of the exhibition Living in Color is also devoted to the artist’s influence and enriching contribution to both the Bahraini graphic design scene and beyond. This representative selection of paintings and prints by his peers and friends Abbas Yousif, Jaffar Aloriabi, Lobna Al Ameen, Asghar Ismael, Ali Khamees, and Ali Mubarak is shown in recognition of Jabbar’s enduring artistic legacy.

Behind the Door
Wasan Madan, with graffiti by Edd Ibrak
November 28–December 28, 2013

You get old and you realize there are no answers, just stories. – Garrison Keillor

Wasan Madan’s solo exhibition Behind the Door focuses on the stories of six individuals from various social backgrounds, professions, and age groups. They are featured in stop-motion videos screened fluidly, back-to-back in captivating black and white, as the according voice-overs guide through their personal stories.

These six chapters of a loosely-bound story from the neighborhood behind Bab al Bahrain bare witness to the transformations the area has undergone throughout the years. Each of the six people featured in Behind the Door tells of the invisible paths that intersect with one another throughout the Manama Souq.

Wasan Madan’s multimedia installation recreates individual elements that have caught her eye while spending time in the market. The videos are screened behind an old wooden door that has been dismantled from its original position in the Market and is now reconstructed to become the keeper of the secluded stories featured in this exhibition. Artist Edd Ibrak has been commissioned by Wasan Madan to interpret the opening quote by Garrison Keillor, leading his Arabic-calligraphy-inspired graffiti to frame the screening and seating area.

Behind the Door presents a chance to discover – or perhaps rediscover – a part of Bahrain that is at once well-known but also at times overlooked. It is also an effort to document part of Bahrain’s present history through the local tradition of oral storytelling.

Yousif Ahmed’s solo exhibition Bahrainona is a stream-of-consciousness style depiction of the artist’s home country, told through history and leading up to the present day.

In this sit-specific installation, Yousif Ahmed plays on the name of Bahrain’s anthem Bahrainona (meaning “Our Bahrain” in English), by acknowledging both his personal interpretation of the country’s cultural heritage and legacy, while also poking fun at some of the linguistic and cultural mash-ups that have left their traces over the years.

Although relative small in size, this island nation has absorbed an immense number of cultural influences from the people who have passed through the country, each era having left its distinct traces throughout the ages. Bahrain has taken on these influences by interpreting and eventually internalizing them. After being woven into the fabric of local culture, these elements remain foreign, yet at the same time are also to equal parts native.

The site-specific installation symbolizes the country’s ability to persist throughout relentless pressures to change fully and lose its identity in tidal wave of novel influences by remaining true to itself and choosing wisely the external elements it has made its own. Many things have come and gone but what is true has remained and therefore become – Bahrainona.

Omar Al Rashid’s latest solo exhibition at Al Riwaq Art Space, entitled The Knight, is at once a study of the artist’s advanced technical abilities, but also an intense exploration of his signature subject matter. Well-known and wildly acclaimed for his bold use of color and assertive artistic statements, Omar Al Rashid presents works made during the recent period of his career, the majority of which focus on the relationship between an honorable man and his horse, as well as the intuitive bond they share.

The artist’s relentless exploration of themes that both enrich and complicate inter-personal relationships (or, as in this case, an affectional bond between species) span attachment, dependence, and loyalty. The nuanced and tender nature of this tie between two individuals, which can also be tumultuous and arduous, is reflected in its endless versatility through Omar Al Rashid’s artistic expression, using shades of color that reflect and represent the infinite complexity of emotions.

Omar Al Rashid’s works in the exhibition The Knight span different media, from large oil paintings to delicate ink drawings, and he expertly utilizes these assorted formats to convey the bold and the affectionate. He uses his artistic landscape to create narratives that tell of the wild adventures that exist both internally and externally. The Knight opens a window to a world of imagination and excitement, where the title character can be understood as the man in the paintings, but also as the man who creates him.

Although interested in the arts from a young age, Everitte Barbee only begin studying Arabic calligraphy on his first trip to the Middle East. During a semester abroad in Damascus in the autumn of 2009, Barbee began learning to write the Ruq’a, Diwani and Diwani Jali scripts from a master calligrapher named Adnan Farid. Since graduating from the University of Edinburgh in September 2011, Barbee has been living in Beirut in order to continue improving both his Arabic language skills and his calligraphy.

Barbee currently works on canvas, paper, and skin. All of his work is comprised of Arabic text, illustrating complex images and ideas. He has participated in three group exhibitions and one solo exhibition in Lebanon, in addition to exhibiting work in the Mustapha Basha Museum in Algiers for the Algerian International Festival of Arabic Calligraphy. He currently has upcoming exhibitions planned in Saudi Arabia, the United States, and in Lebanon. Eternity, For Now is his first exhibition in Bahrain.